We Are Open!
Thank you for your loyal continued support through the years. We look forward to continuing the outstanding customer service that we offer our guests at Sole’ as well as a clean, comfortable, SAFE place for your lodging needs while in Pensacola. We are continuing to do our part in following CDC guidelines. Our continental breakfast is being offered again as well as our daily “happy hour” . We look forward to serving you again and thank you for choosing us. 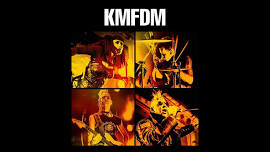 Emerging from the European underground in the 1980s, German firebrands KMFDM were part of the industrial wave that crashed the mainstream in the ’90s alongside kindred spirits Nine Inch Nails, My Life with the Thrill Kill Kult, and Ministry. With their bold, propaganda-styled album covers and techno-metal anthems, they placed more focus on pulsing dance beats and provocative messages than their darker contemporaries. The band established their trademark style on 1986’s What Do You Know, Deutschland? After an early-’90s relocation to the U.S., they began crashing clubs and dance charts with the hits “Naive,” “Split,” and “Vogue.” The group imploded following 1999’s Adios, but frontman and founder Sascha Konietzko soon reconfigured the lineup and continued maintaining KMFDM’s streak of thought-provoking and body-moving output.

General Admission * Standing Room Only * If Any Seating Is Available, It Will Be On A Strictly First Come-First Serve Basis * All Ages * Additional $5 Cash Surcharge At The Door For Under 21 * Attendees Under 16 Must Be Accompanied By A Ticketed, Adult Guardian * Lineups and times are subject to change * Any ticket suspected of being purchased for the sole purpose of reselling can be canceled at the discretion of Vinyl Music Hall and/or SeeTickets * No refunds – No exceptions * No re-entry.